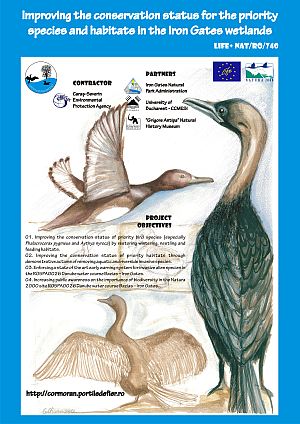 ROSPA0026 Danube Water Course Bazias – Iron Gates is classified as the third important bird area from Romania. The area represents an important stop point during the spring – autumn passage seasons for the wild birds, as it is located on the Tisa – Mures – Danube flyway. Alongside the pygmy cormorant and ferruginous duck, in the area are found many other protected species. 23 bird species listed on the Habitats Directive have been identified in the ROSPA0026 Danube Water Course Bazias – Iron Gates. Also, 3 amphibian species are present (Bombina bombina, Bombina variegata, Bufo bufo), 1 species belonging to the Reptilia (Emys orbicularis) and 4 species from Pisces (Gymnocephalus schraetzer, Gymnocephalus baloni, Zingel streber, Zingel zingel).

The area is endangered by severe biodiversity threats, such as: wetlands eutrophication, aquatic invasive species, birds nesting and resting habitats degradation, and wetlands pollution. As well, we documented a lack of understanding the importance of the Natura 2000 network’s role in the project area.

The purpose of the project is to provide a long term favorable conservation status for Pygmy Cormorant and Ferruginous Duck priority species and their habitats from the ROSPA0026 Danube water course Bazias – Iron Gates, by implementing and disseminating state of the art conservation measures.

This website uses cookies to improve your experience while you navigate through the website. Out of these, the cookies that are categorized as necessary are stored on your browser as they are essential for the working of basic functionalities of the website. We also use third-party cookies that help us analyze and understand how you use this website. These cookies will be stored in your browser only with your consent. You also have the option to opt-out of these cookies. But opting out of some of these cookies may affect your browsing experience.
Necessary Always Enabled
Necessary cookies are absolutely essential for the website to function properly. This category only includes cookies that ensures basic functionalities and security features of the website. These cookies do not store any personal information.
Non-necessary
Any cookies that may not be particularly necessary for the website to function and is used specifically to collect user personal data via analytics, ads, other embedded contents are termed as non-necessary cookies. It is mandatory to procure user consent prior to running these cookies on your website.
SAVE & ACCEPT